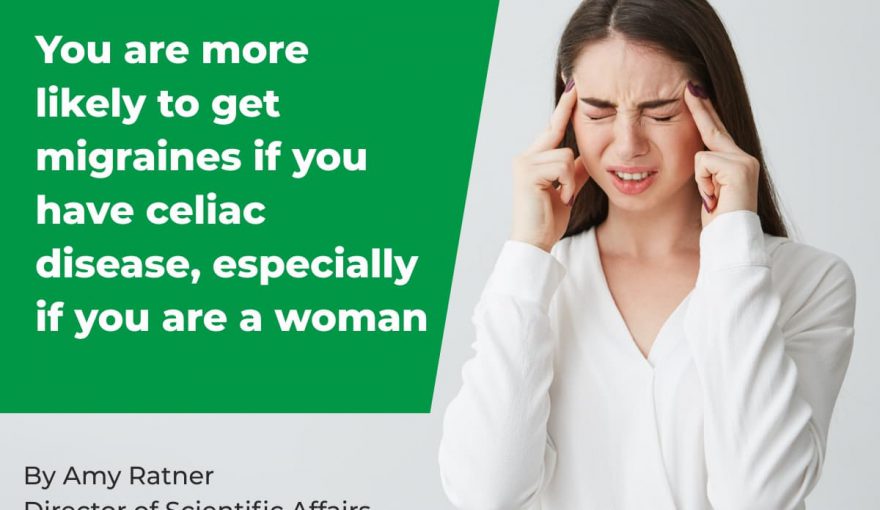 You are more likely to get Migraines if you have Celiac Disease, especially if you are a Woman

Headaches are more common overall in celiac disease, new study finds up to ten days a month, Claire Baker lives with migraines, so she can see herself in results of a new study that found migraines are common in women who have celiac disease.

“Migraine days really hamper my ability to enjoy life. Unmedicated, I can lose whole weekends to them,” noted Baker. “Fortunately I’ve found a medication that addresses the worst of the pain so I can keep working, but even with the pain managed, they pretty much wipe me out.” Baker, senior communications director at Beyond Celiac, was diagnosed with celiac disease in 2010.

Overall, people with celiac disease get more headaches, including migraines, than people who don’t have celiac disease, according to a new study published in the journal PLOS One that adds to international evidence of neurological symptoms in celiac disease.

Women’s chance four times greater than men’s
Women with celiac disease were about four times more likely to have migraines than men with celiac disease, 80 percent compared to 19 percent. Migraines were frequently pulsating, usually affected one side of the head and were accompanied by nausea and/or vomiting. However, they often did not have an aura, which is a sensory disturbance that can include flashes of light, blind spots, and other vision changes or tingling in the hand or face, which is associated with migraines.

The study also found that type 1 diabetes was less common in those with celiac disease who reported migraines compared to those who reported headaches that were not migraines.

Study participants with celiac disease reported their symptoms at the time of diagnosis. Those who said they had a history of headaches were evaluated with international criteria for headache diagnosis and classification. The gastrointestinal symptoms of those with migraines and headaches were then assessed.

Previous studies in the United States and Italy have also found an increased prevalence of migraine in those with celiac disease, although the percentages vary, the study authors wrote, noting that their sample size was large than the other studies.

Migraines and GI symptoms
Migraines themselves can have gastrointestinal symptoms, specifically nausea and vomiting, and the study notes that celiac disease should be ruled out before these symptoms are attributed to migraine alone. “The evaluation of celiac disease in patients with migraine and these simultaneous gastrointestinal symptoms seems reasonable,” the study says.

Researchers pointed to 2020 study by researchers at Sheffield University in the United Kingdom that found some changes in celiac disease patients’ MRIs before and after exposure to gluten. “Performing a brain imaging study in celiac disease patients with migraine before and after the start of a gluten-free diet can be useful in better understanding the physiopathology of migraine in the patients,” the authors wrote.

Beyond Celiac has awarded a two-year established investigator grant to the Sheffield researchers to expand investigation of the neurological and neuropsychological manifestations of celiac disease and gluten-related disorders. This research will be a continuation of earlier work from Nigel Hoggard, MD, and Iain Croall, PhD.

The new research will examine the relationship between findings from brain scans of patients with gluten-related disorders and a variety of different parameters. The study will focus on how effectively the gluten-free diet treats these neurological problems and will further investigate long-term effects on cognitive function, severity of depression and anxiety symptoms and overall quality of life.

Up to 500 patients who have had brain scans are expected to participate, the largest studied so far. The new results will help to corroborate evidence and further clinical understanding of the neuropathology of celiac disease and gluten-related disorders.

Limitations of the migraine study include lack of measurement of antibodies against antigens found in the central nervous system and the larger number of study participants who were women.

You can read more about the study here: https://www.beyondceliac.org/research-news/likely-to-get-migraines-celiac-disease-woman/